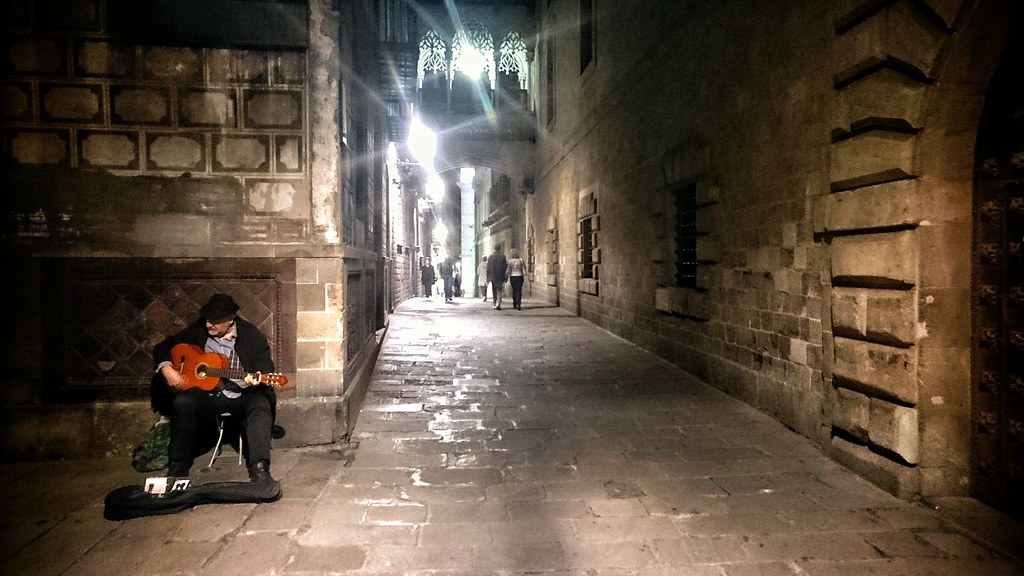 The streets of Barcelona. by Robert Michael Poole

As a slight intermission between my posts about my  “Journey to the silver side” I thought I’d go back over some of my images from 2015 and discuss what I like about them.

This image was taken on the way back from a restaurant in the Gothic Quarter of Barcelona. At the time I was a 100% Fuji shooter and had spent the day shooting with my Fuji X-E1 now, I love this camera. It’s small, lightweight, I can drive my wife mad by spending a fortune on legacy lenses to use with adapters! My one main gripe though is battery life. Partly this is the way I use it, I probably use the LCD screen too much etc. Partly though this is due to the fact that the X-E1 is EVF only which puts a strain on the battery life. I carry three batteries for my X-E1 when I’m out and about but by the end of the night walking home all three were dead! That’s when I came across this scene. The guitarist is a man called Miguel Ale and he is an amazing guitarist, so much so my wife insisted on buying not one but two of his albums!

The old saying is that the best camera is the one you have on you and thankfully I had my mobile phone, a Sony Xperia z3. Until I took this shot I was pretty cynical about smartphone photography, what could I possibly get from such a small sensor and a plastic lens? I couldn’t set ISO, aperture, shutter speed. But… I love this shot! I’ve got to say it’s one of my favourites of 2015.I love the textures of the brickwork, the lightflares, the motion blur of Miguel’s hands. I’m a big fan of negative space and I include it a lot in my photography here it is balanced nicely by the flares and the pedestrians in the background.

Will my phone replace my Leica m9? No. But it is good to know that I always have a camera with me if the batteries run out.