In the Darkroom With Walter Rothwell

I spoke to London based Freelance photographer Walter Rothwell about the challenges facing a film photographer in an age when most photography is viewed online. You may remember Walter as the photographer I featured earlier this month in my Flickr roundup. 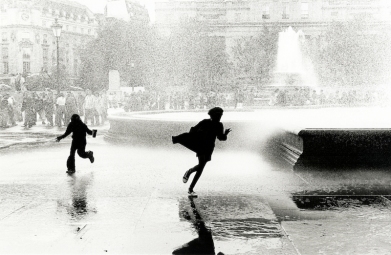 Well, this is written from the point of view of a darkroom printer, for info on scanning negs, you will have to ask someone else! The first major difference when printing is to realise that when photography is viewed on a light emitting screen rather than a silver print, it changes the entire equation. If the picture is for internet display I will print the highlights down, i.e. burn them in to a greater degree than normal, subtle ranges in the lightest areas are lost once online. Pre-flashing the paper, giving it a tiny burst of white light before the negative is printed, can be a great help in this respect, what may appear dull on the print jumps out online. For the same reason the darker tones will never appear with the same density as a silver print. There is only so far you can burn-in before maximum D-Max is reached and the paper simply won’t get any darker, nor will it on the screen, the only way to compensate is in photoshop.

After printing I scan on a flat bed scanner, the results are always a bit disappointing, the straight scan usually has a flat, grey appearance. The contrast and brightness need to be adjusted until it resembles the original print as far as possible. I have mixed feelings about sharpening, when I first started working on scanned photos I used to apply a small amount as the on screen image never had the same bite as a print but I have become increasingly uncomfortable with this. Spotting, the elimination of dust spots, is another major difference, when the silver print is spotted inks are used, although these blend in perfectly when viewed by eye they stand out on a scan as a different colour. Due to this it’s a waste of time manually spotting prints for the internet as it all has to be done again, for this reason I do the spotting in photoshop.

All this raises the question; why not scan the negatives? It’s a personal choice, I have been printing in a darkroom for 25 years and instinctively know how to achieve in a couple of prints what seems to take much longer on a computer. The adjustments I make are minimal and done for authenticity rather than enhancement, it’s all part of using clashing technologies to achieve the same goal, a beautiful picture for people to view.